Ask my parents, ask my friends, ask Sarah… I always  do things the hard way.  I’m not sure why, I’ve been told it’s because I’m a Capricorn(?), but I’ve recently been recognizing it when it happens.  Por ejemplo, I can’t just make coffee in the morning, I have to preheat everything (Bialetti, Mug, 1/2 & 1/2), find the perfect blend of coffee/chicory/cardamom (5:1:dash), then watch everything fastidiously while Sarah’s ginger tea (finely chopped) comes to a boil.  The tiny house, too, has proved to be an excellent mirror to this particularly pervasive character trait.  I couldn’t just slap up exterior window trim and caulk the heck out of it.  Too easy.  I had to devise a clever interlocking system that would guarantee (so far) water-proofness.  While I DO think it’s a good system, It doesn’t work any better than the easy way, looks about the same, and complicated things greatly when I realized it’s hard to tuck the same piece of siding under two sides of a window.  Oh, and btw, I caulked the heck out of it.  Here are some pictures.

Knowing my aforementioned proclivity toward encumbrance, it was time to run electric.  We walked through the house and discussed if we really need a three-way-switch to the loft, or even a porch light.  We nixed both because we prefer localized, movable lighting (aka lamps) that we could plug in and click on at the source.  With only electrical outlets needed in the house, the wiring was easy.  Just hook the whole house up like one big extension cord.  Plug one end in and everything works!  The first few were a bit tedious (tiny wires/connection + big clumsy hands) but once I got the hang of it, my sway towards complication began.

It started innocently enough.  I realized that I was using 12-3 Romex when I only needed 12-2 for our simplistic system (Meaning I had one extra ‘hot’ wire: see below).

Then I thought, “Hey!  I have two hot wires in the same casing, why not make the house on two circuits (red and black) and they can share a neutral!”  This made sense  and I later found out that this used to be a common practice.  So I wired the outside socket and the kitchen socket on the same circuit (red) and the rest of the house on black.  Good in theory, more complicated than I thought partly due to my lackluster wiring skills, and partly due to not fully understanding what it means to share a neutral.  SO, after wrestling with it over the course of a rainy afternoon, and getting some sage advice from an electrician friend, I scrapped the idea and wired it all on black.  One circuit, no problem.

Do you see the progression, though?  Can you see how it moved from a straight forward system to a more complicated/better way?  I started by recognizing my proclivities, then as I put my head down and started doing it, old habits kicked in and I wanted more/better/different.  I think this is a blessing and a curse.  A blessing because the need to improve has lead me to some pretty awesome experiences and taught me a great number of valuable skills.  It’s helped me learn things quickly and understand them fully.  It’s a curse because I tend to get stuck in the process and have a hard time extracting myself…taking a step back…and realizing that somebody has already figured out how to do this work, and I can probably trust that they knew what they were doing.

So my take away: always find out for yourself….but also trust that other people have already found out, and it’s on their firm shoulders that I wobble around on trying for something ‘new’. After all, it seems that the ‘new’ thing these days, is actually an old thing rediscovered.  Why not walk the well established path for a bit.  Find out where it leads.  Take some easy steps and get to know the trail before banking left into the brambles and steep inclines of improvised electronics and sketchy wiring.  The end. 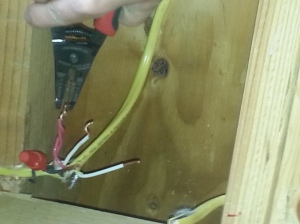 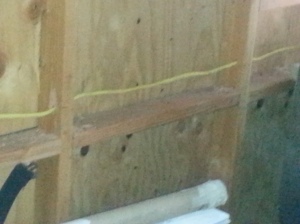 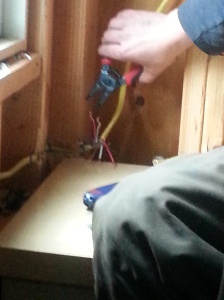 Hi! We are Sarah and Joseph and we’re building a tiny, off-grid house on wheels.

We want this site to be like the friendly, local bookstore/coffee shop/yoga studio of your dreams–where we all get to meet each other and chat about our latest tiny house finds, our big questions, and the joys and challenges of trying to do this off-grid, off-menu life.

Please make yourself at home!

add a nail to our tiny house dream!